In October, I ventured west with a good friend in search of water, rocks, and other arkadaşlar. The rocks I had in mind would be large enough to climb on. I found some of those, but I also found many, many more of a significantly smaller scale, covering the ground and stretching far out into the sea, contributing to an incredible landscape. This discovery also serves as a reminder that although we have large goals in mind, it’s all the smaller fragments of life coming together, however they may, in various shapes and sizes, that ultimately contribute to our being. Together, they make up the landscape of our lives. 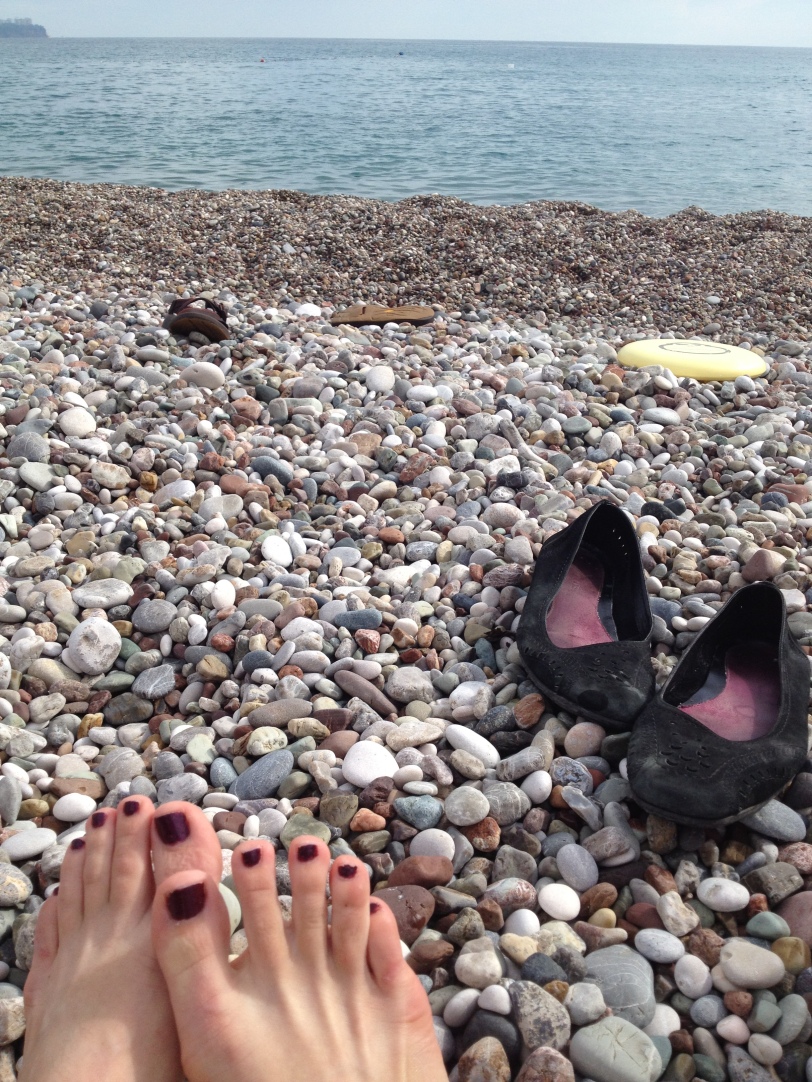 Our destination was Antalya, noted for it’s gorgeous view of the Mediterranean, framed by the majestic Taurus Mountains in the distance; the nightlife; Kaleiçi, the old town; and Hadrian’s Gate. A large group of Fulbrighters were gathering here and setting out on various adventures: hiking the Lycian Way, diving in Kaş, exploring Olympos. People were coming in from all over Turkey, and although it had been raining for a few days in Antalya, it would be nice to see friends.

Wyatt and I began our journey accompanied by my amazing roommate Eda. Her family was hosting us in their home in Tarsus, which happens to be the town St. Paul was born in, as well as the location Mark Anthony and Cleopatra first met. No big deal. We arrived on a bus after dark and were met by Eda’s brother, Bilal. Dinner was waiting on us, and we were treated as special guests. After feasting on homemade mantı, pilav (rice), and Fırında Et, we sipped our Türk kahvesi and waited on the grounds to cool so Eda’s aunt Öznur could read our fortunes. 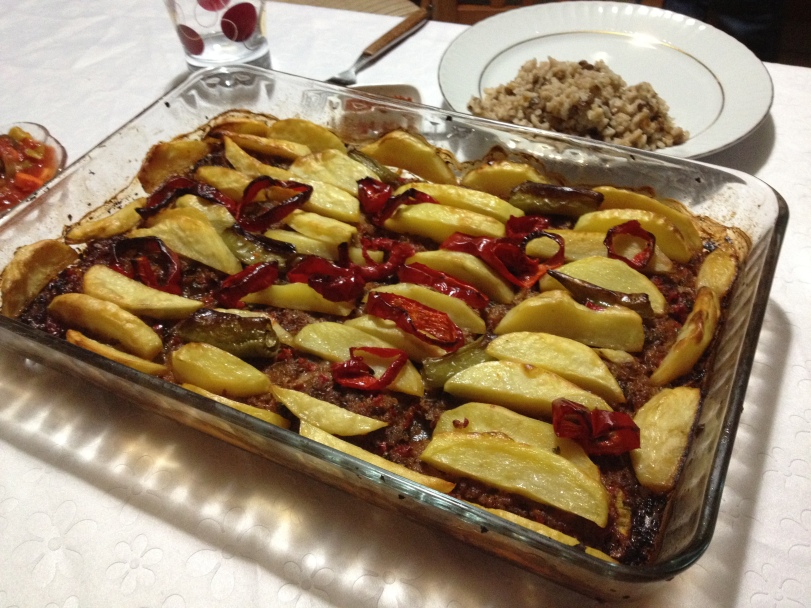 Waiting on the coffee grinds to cool so they can be read. Metal helps displace heat. 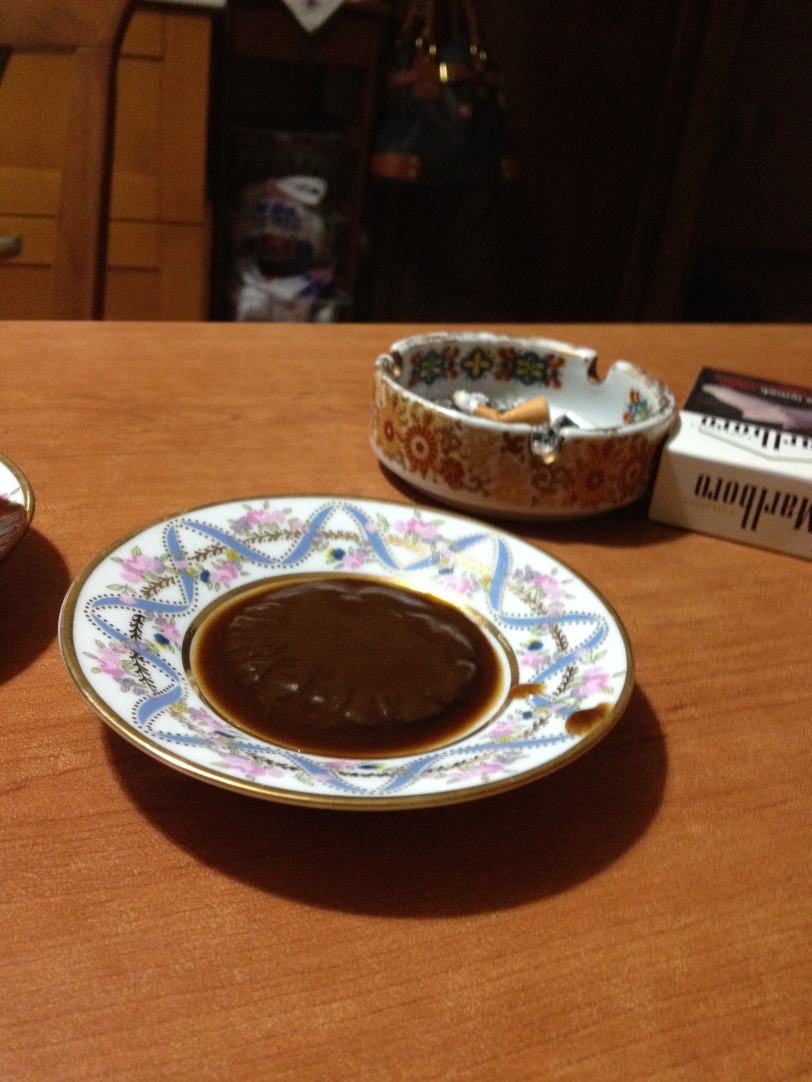 Will my wish come true? The coffee grinds will soon tell…

After dinner, we headed out for a drink in the old town. Tarsus is one of the oldest inhabited cities in the world, with remnants of ancient history still being discovered today. The structures in this part of town are unique in that they hang out over the narrow streets. Many have been renovated and turned into businesses. We stopped in one such locale for a beer, and were shown to our own private room to lounge on benches piled with pillows. Since we were with locals, we met several folks about town, including the proprietor and the ‘tatoo king of Tarsus.’

An old house-turned cafe/bar in Tarsus 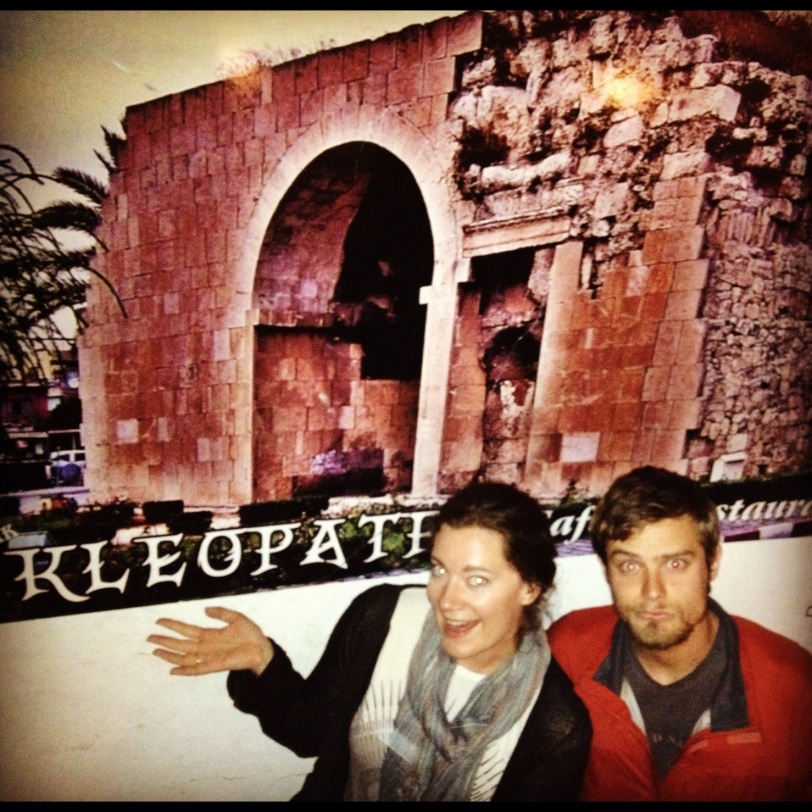 Since our time was limited, we had a driving tour of Tarsus by night, complete with glimpses of the Cleopatra Gate, the Şelalesi, mosques, churches, ancient bath houses, and a statue of the 17th century Ottoman folk poet Karacaoğlan. The next morning we had breakfast right on the Şelalesi, or waterfalls, of the Nehri River. Water happens to be my favorite element, so breakfast was very pleasant. Before heading to the otogar we stopped in to visit some of Eda’s other relatives. We sipped Türk kahvesi in their garden and were treated to freshly picked sweet lemons as well as sütlaç, a rice pudding sprinkled with cinnamon. It was delightful. 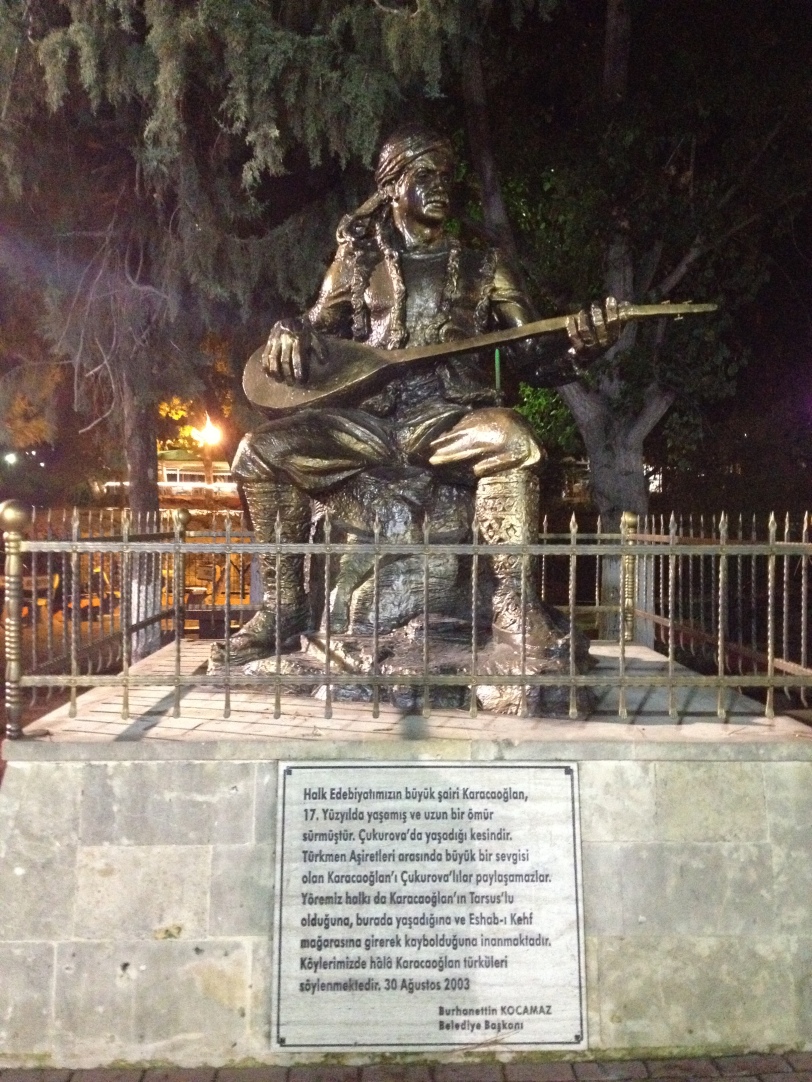 the Şelale we breakfasted on 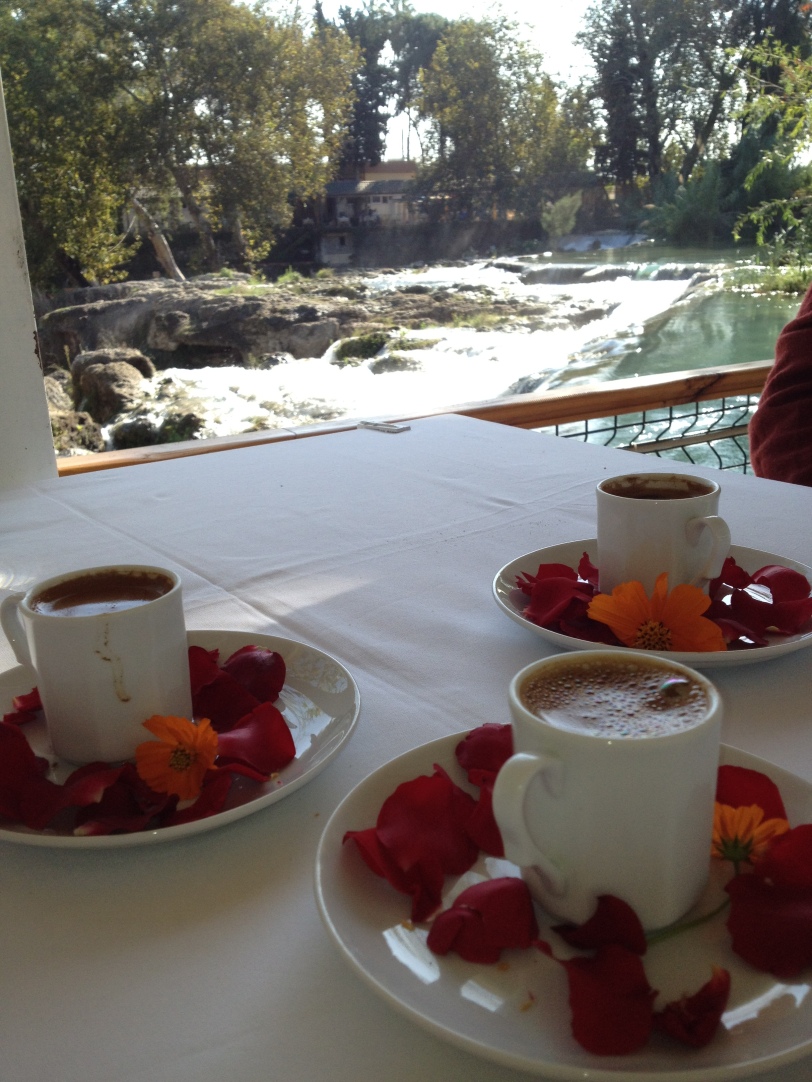 freshly picked sweet lemons, which you can eat straight up

Bringing frisbee to the otogar, for all to enjoy

Around midday we hopped on our bus and tried to settle in for the twelve hour journey. We were slightly concerned that we were only issued one seat for the two of us. Considering the length of our journey, we were really hoping we would each get our own seat. We were glad to find two seats waiting on us, and off we went. About twenty minutes into the journey, the steward asked for our tickets. He seemed concerned. Whatever. A few minutes later he returned, and explained to us that our tickets were not for today, rather for a day the following week. Great. We had visions of being booted off the bus, only to wait on the side of the road for another few hours for a bus going our way, which would ultimately delay our arrival time to a very unreasonable hour. We waited. Eventually, while juggling at least two cell phones, and apparently after much discussion on both of them, the steward returned and gestured us to move several seats up, all the while muttering something about the cost of the tickets and him getting money, etc. We moved, and hoped he wouldn’t try to make us purchase tickets again. Onward we drove. 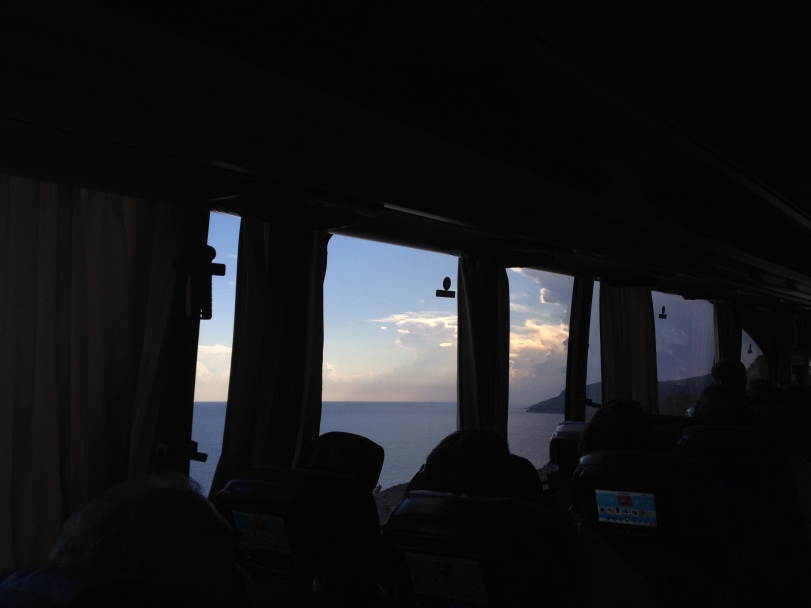 The view from the bus

Turkish buses are equipped with tv monitors in the backs of seats. Sometimes they work!

Around Mersin, we finally got a glimpse of the sparkling sea. It’s visible between stacked apartment buildings and other tall structures. When the bus left town, we had a clear view– water on the left, steep mountains on the right. After about six hours, the bus pulled into a roadside eatery, and we stretched our legs and grabbed some Gözleme and çay. Unsure of exactly when our bus would pull out, we ran down to the Mediterranean for a quick splash. Ahhhh. It was gorgeous! This re-energized us– bring on six more hours on the bus!

Where we stopped to refuel along the way 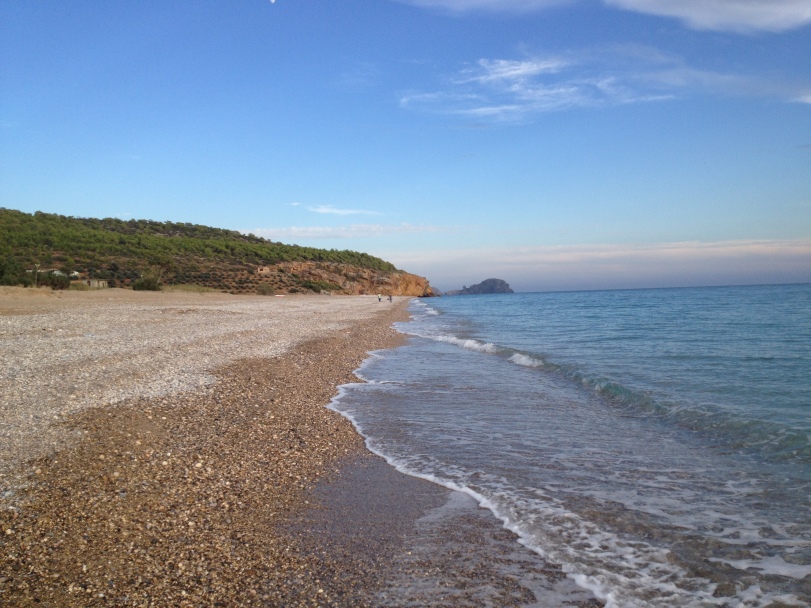 The Mediterranean coast behind the eatery along the highway. Not a bad reststop!

After several other adventures I won’t go into here, we pulled into the Antalya Otogar just after 12:30 am. We made it! And it was pretty chilly. After finding a shuttle to drop us near Kaleiçi, the old town, we wandered through the ancient walls past cafes and bars alive with revelers in search of our hostel. Eventually, we ran into some familiar faces– some of our friends were just heading home from a night on the town, and were overjoyed to see us. Yay! 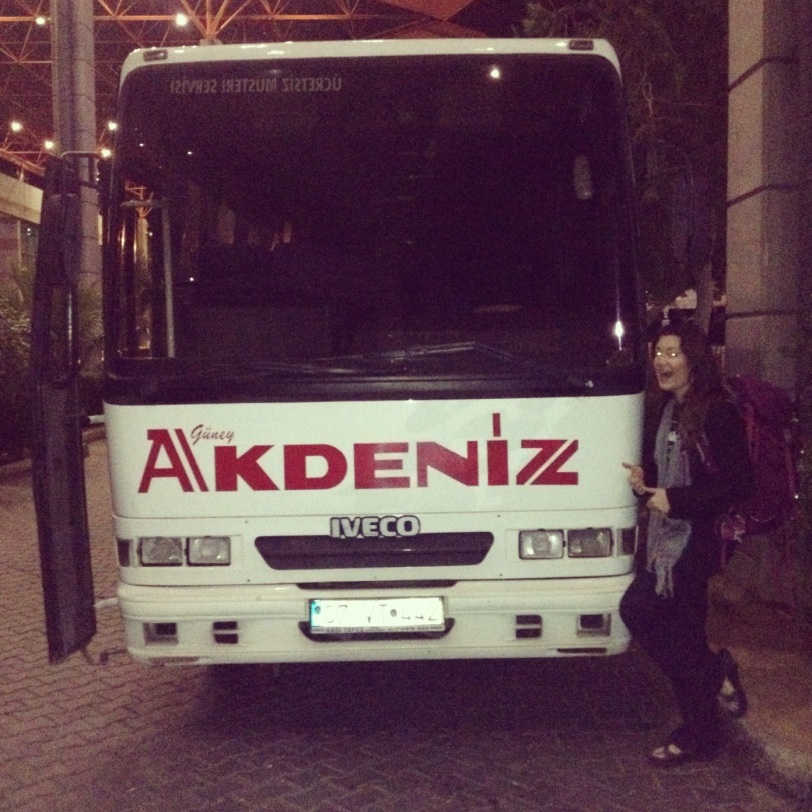 The bus that carried us twelve hours along the southern coast of Turkey.

With friends in Antalya

The next day, I passed on a trip to some ancient ruins in favor of sitting on the beach. And this is where I first encountered the rocks. In much of Southern Turkey, the coastline along the Mediterranean is rocky. A word of advice to beach-goers in this region: plan to wear shoes! Being raised on a country road, I can walk on gravel, but these stones are pretty intense on the feet. A small group of us swam, sipped, joked, and enjoyed the day in a beautiful spot, on a rocky beach, with a towering mountain in the distance. 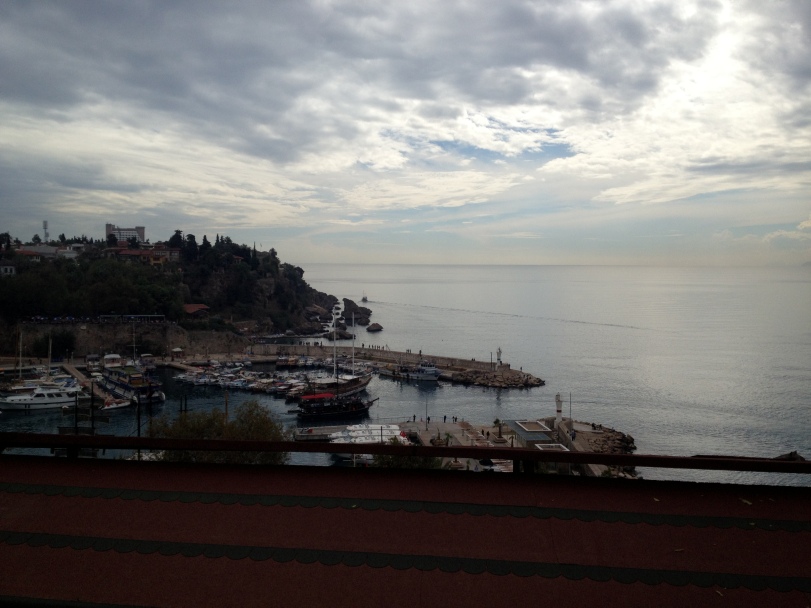 There were some clouds, but it was still a lovely day for the beach

Antalya is a really neat town, but I knew I would be back. So, that evening, we hopped a dolmuş headed towards Olympos, an out-of-the-way beach village near one of the mountains along Turkey’s southern shore named Olympos (there are nearly twenty that have been named this) and right next to Lycian ruins. Our van careened down the windy road into a mountain valley, and eventually dropped us at Bayrams Treehouse Hostel. It turns out, Olympos is full of ‘treehouse hostels.’ They are not all actually in trees, per se, but have the effect of being so. I would highly recommend Bayrams to anyone looking for a chill spot, very reasonably priced and serving excellent food. They whipped up some dinner for us right away, and we settled in around the camp fire to enjoy the evening. 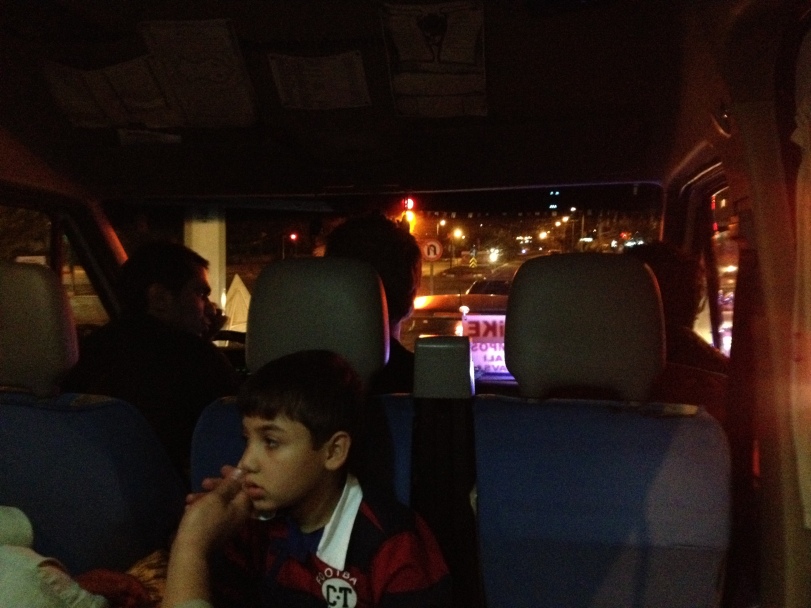 Wyatt took the front seat next to the driver for the dolmus ride. 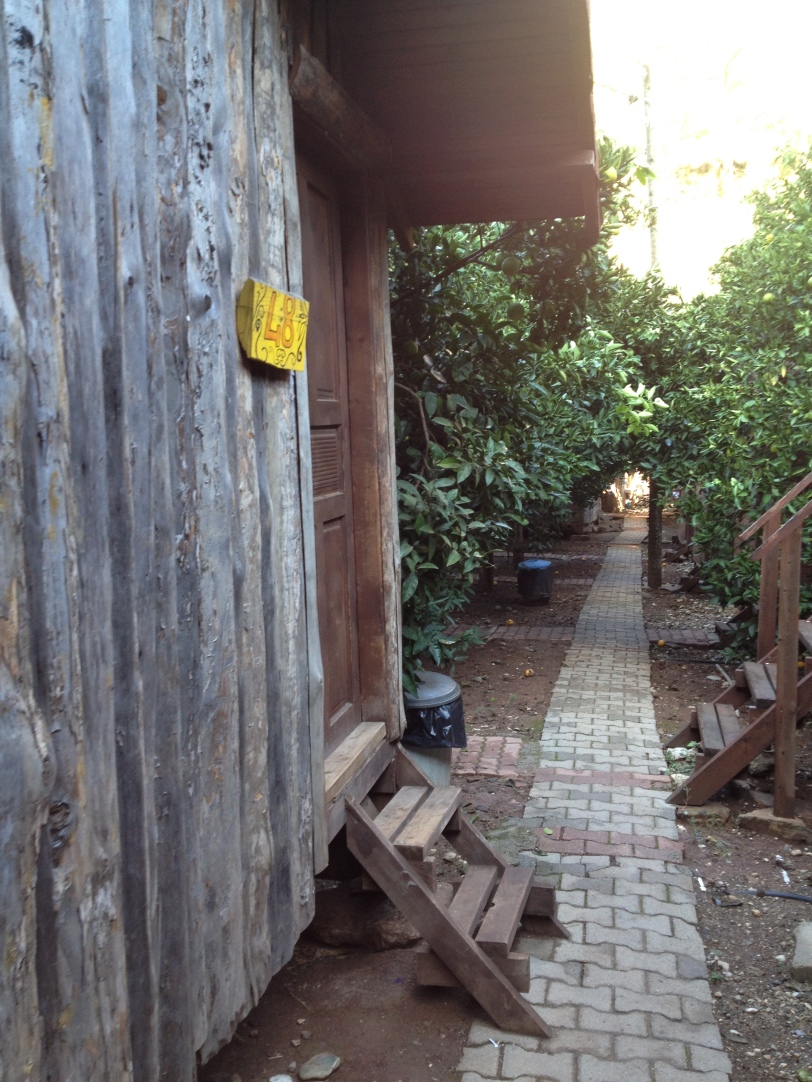 Our treehouse hostel, Bayrams, at Olympos 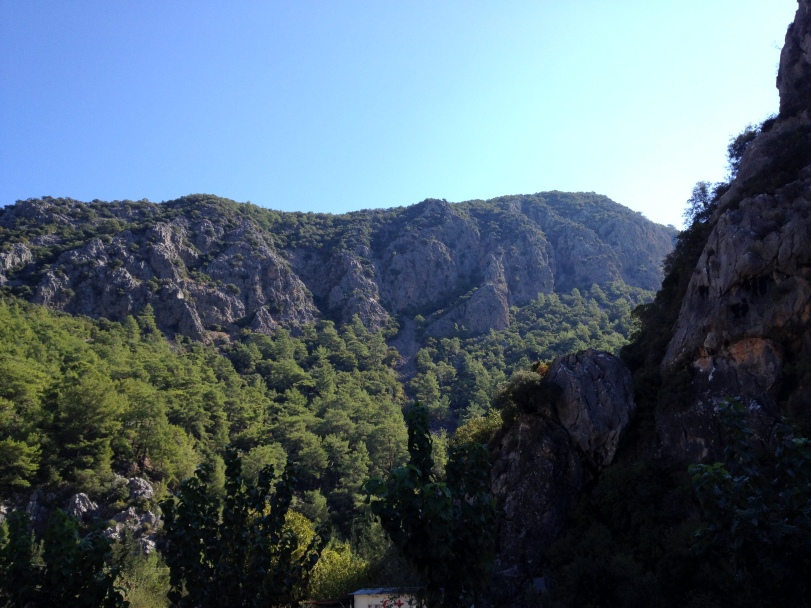 The ruins at Olympos are right next to the water, and though the area is now relatively well labeled, we were still left wondering about the details of the civilizations that had previously inhabited this spot since the history is so rich. The city, which has a history dating from the 2nd century BC, when it was described by Cicero as rich and full of art, was abandoned in the 15th century, but many traces of previous civilizations still exist. The area has been inhabited by Lycians, Romans, Cilicians, Venetians, Rhodians, and now Turks, and several stories from mythology are said to have taken place here. We headed up a mountain to get some climbing in, crawling across stones that had once served as amphitheaters, bath houses, and places of worship. We passed some serious climbers and emerged from the thicket in a cove overlooking the sea, with the pebble beach in the distance in one direction and the Mediterranean flowing into the horizon in the other. Perfect. Here we swam, sunbathed, and enjoyed the view. 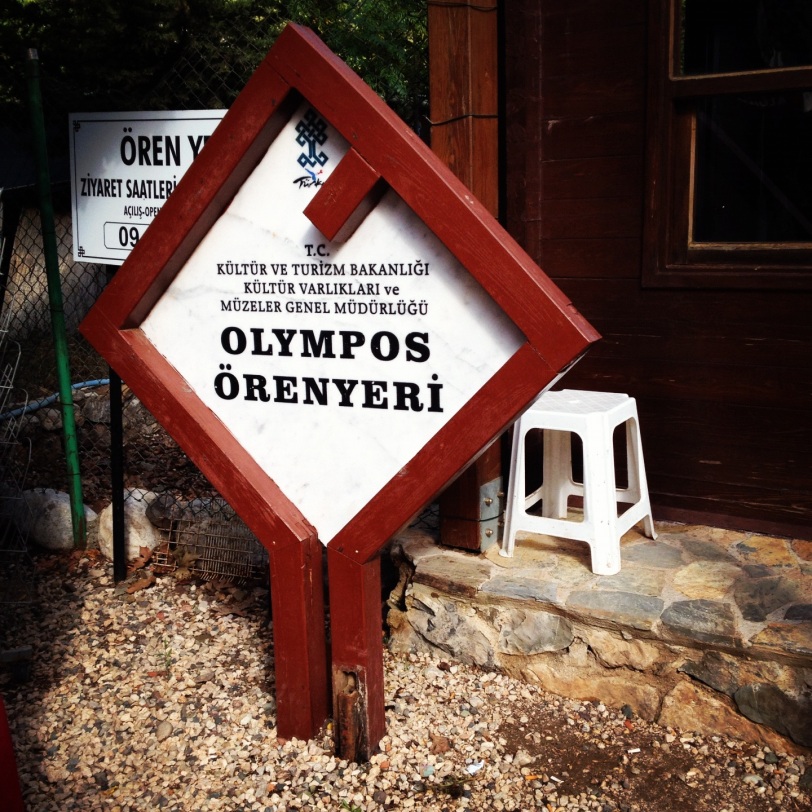 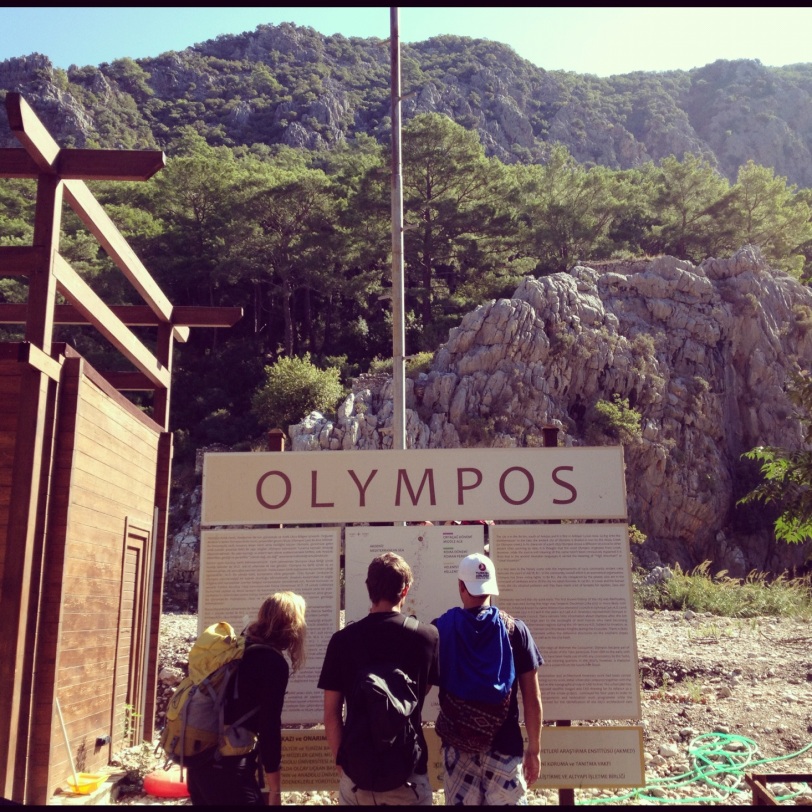 Preparing to head in 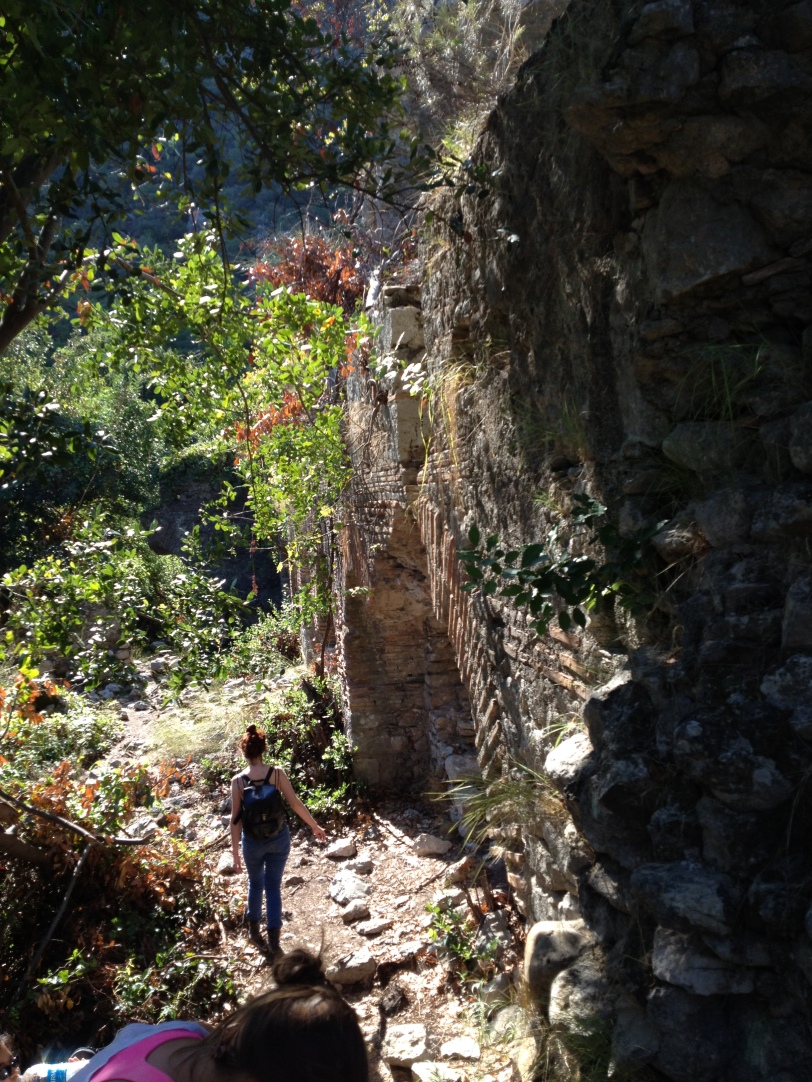 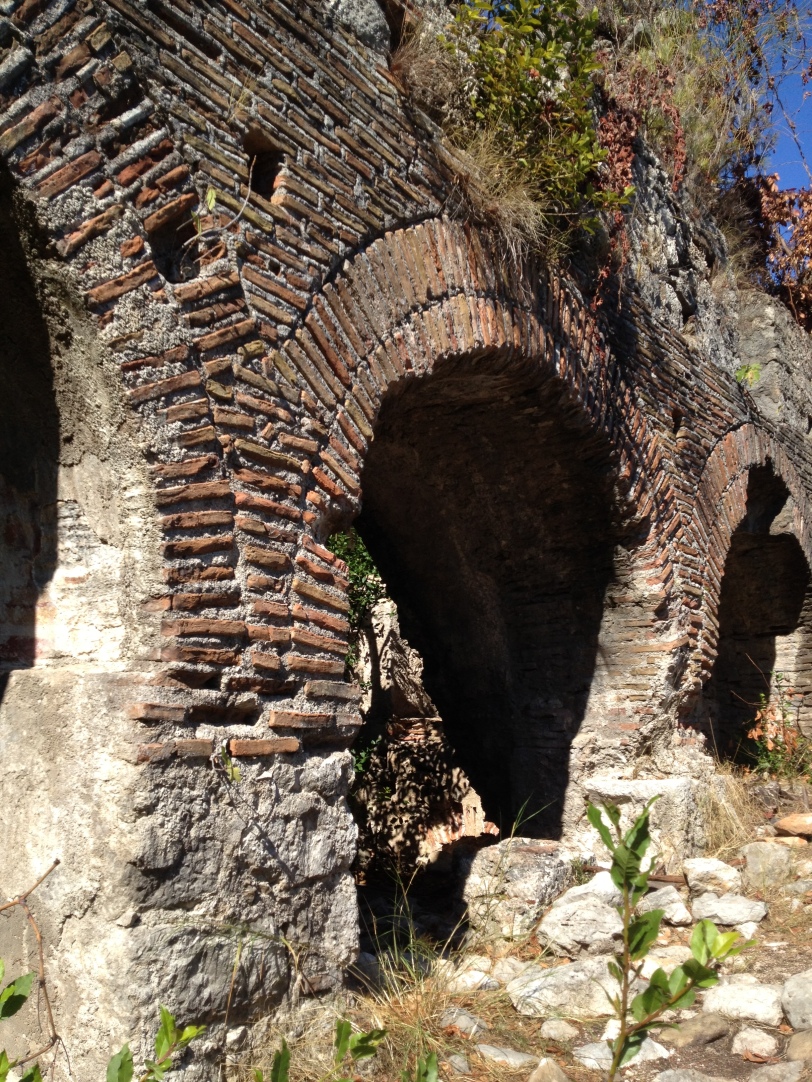 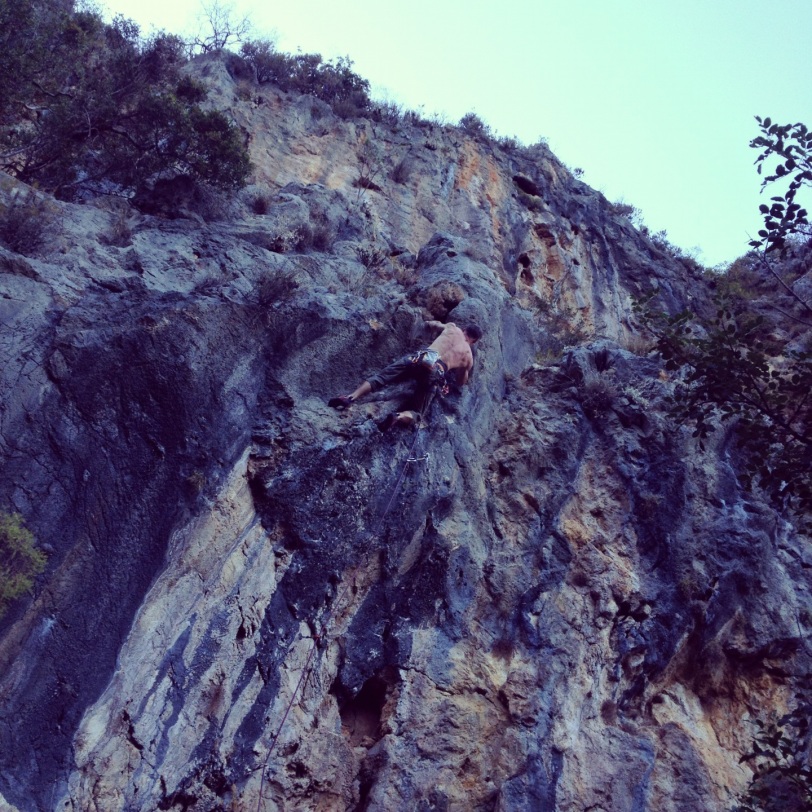 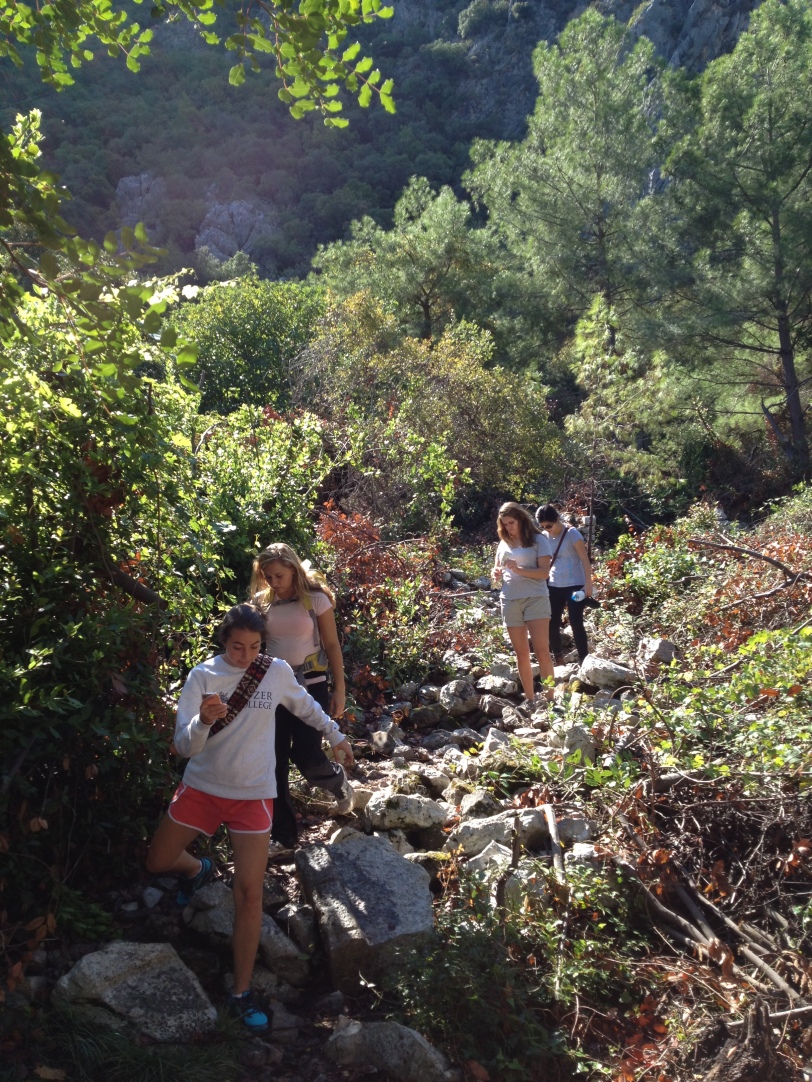 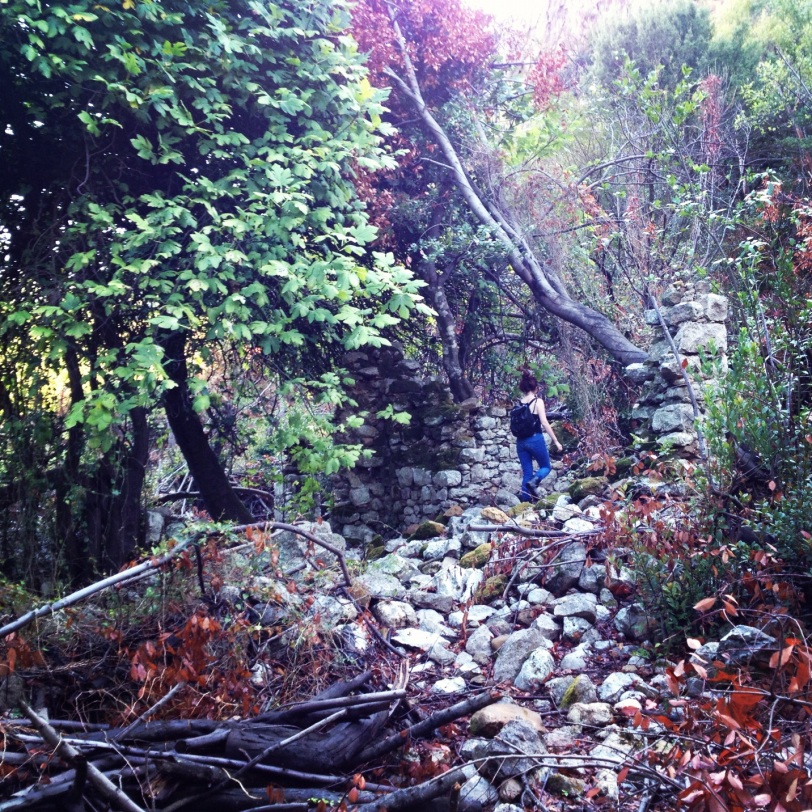 view of the beach

view of the other direction

One night we ventured up some other rocks that contained a magical element– fire! More on that up next. 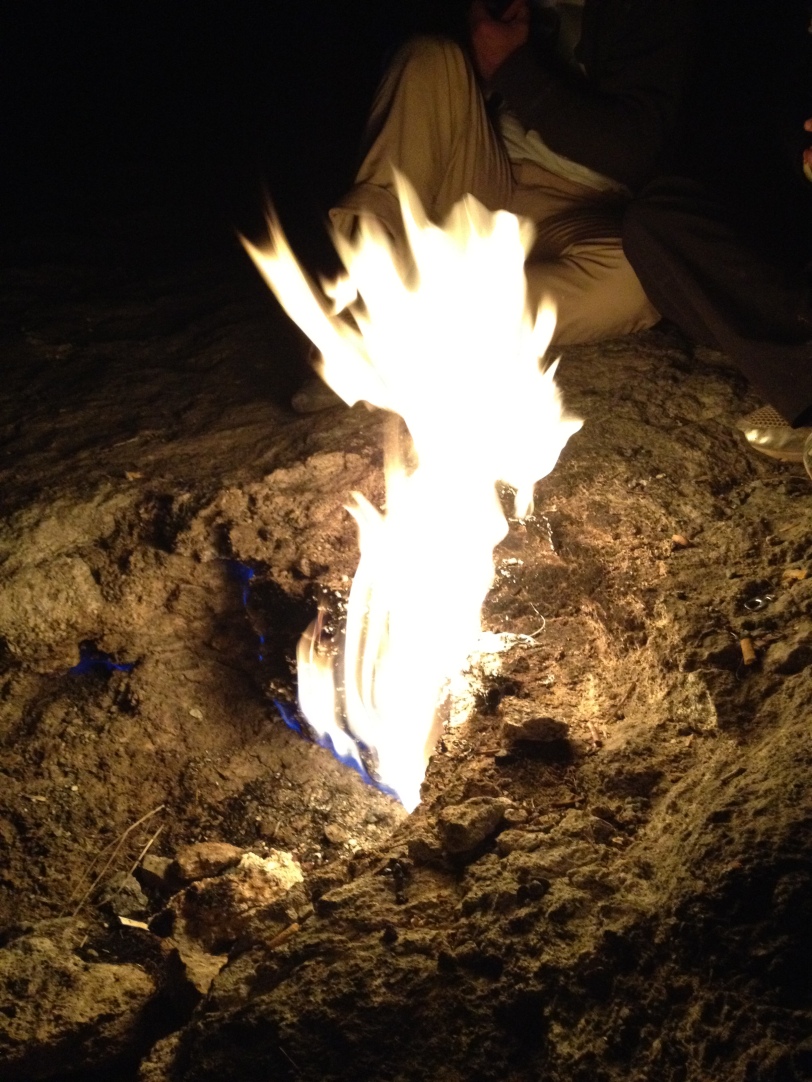 the flames of Chimera

We spent the last day hanging out on the beach, floating in the cool water, nibbling on pomegranates picked from trees along the way, watching the interesting mix of people that were sharing the incredible view with us, and enjoying the company of friends. It turned out to be a very relaxing and enjoyable few days spent in a majestic location with really awesome people. Wyatt, Billy, Caroline and I made the return journey while there was still some daylight, so we were able to enjoy the climb out of the valley, with tree-covered mountains as far as we could see. So serene, even in a packed dolmuş. 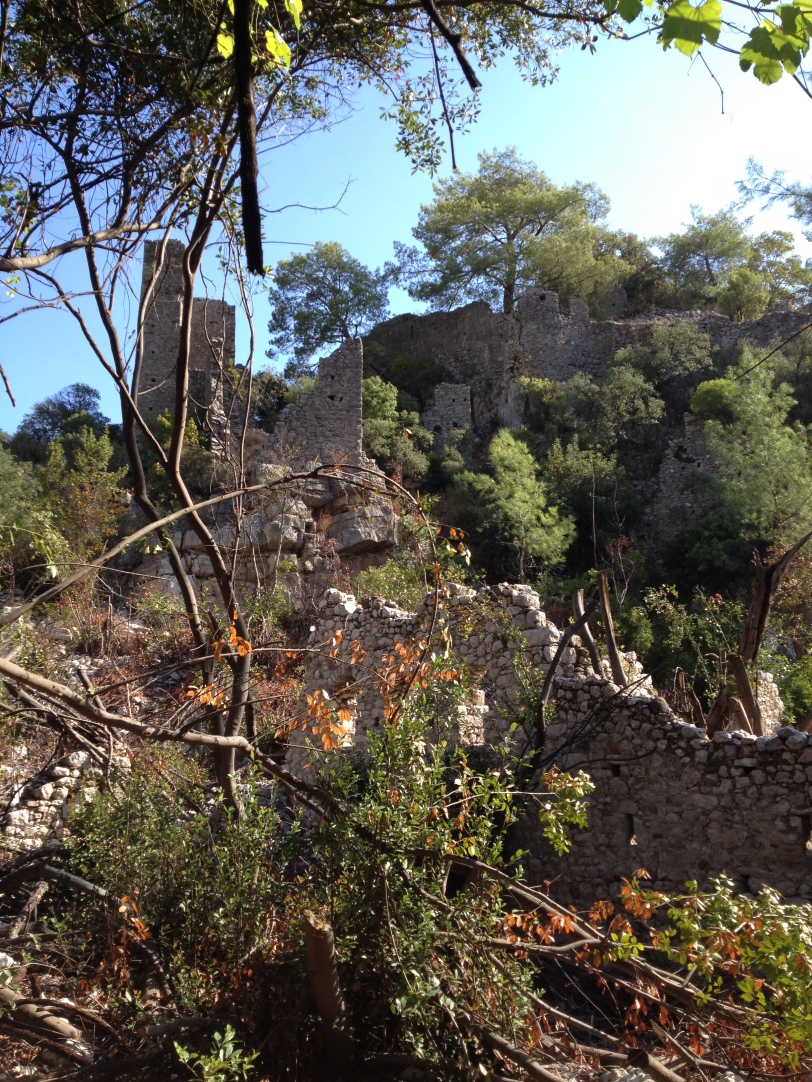 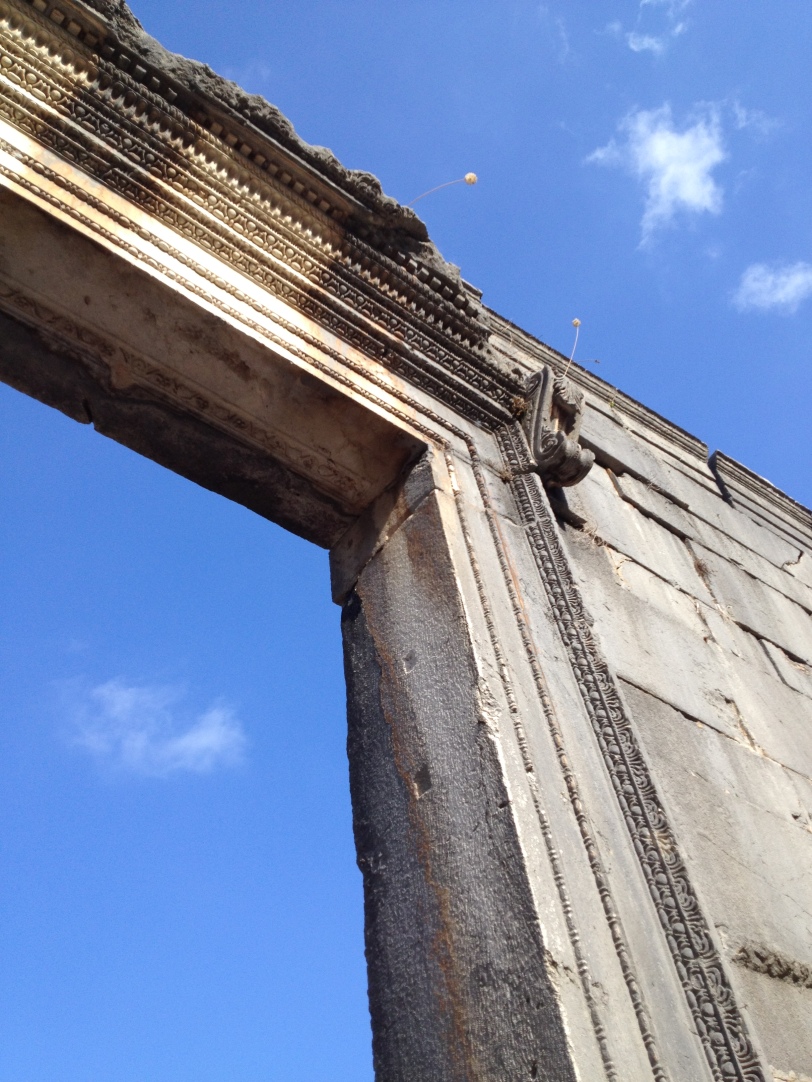 so much detail remains 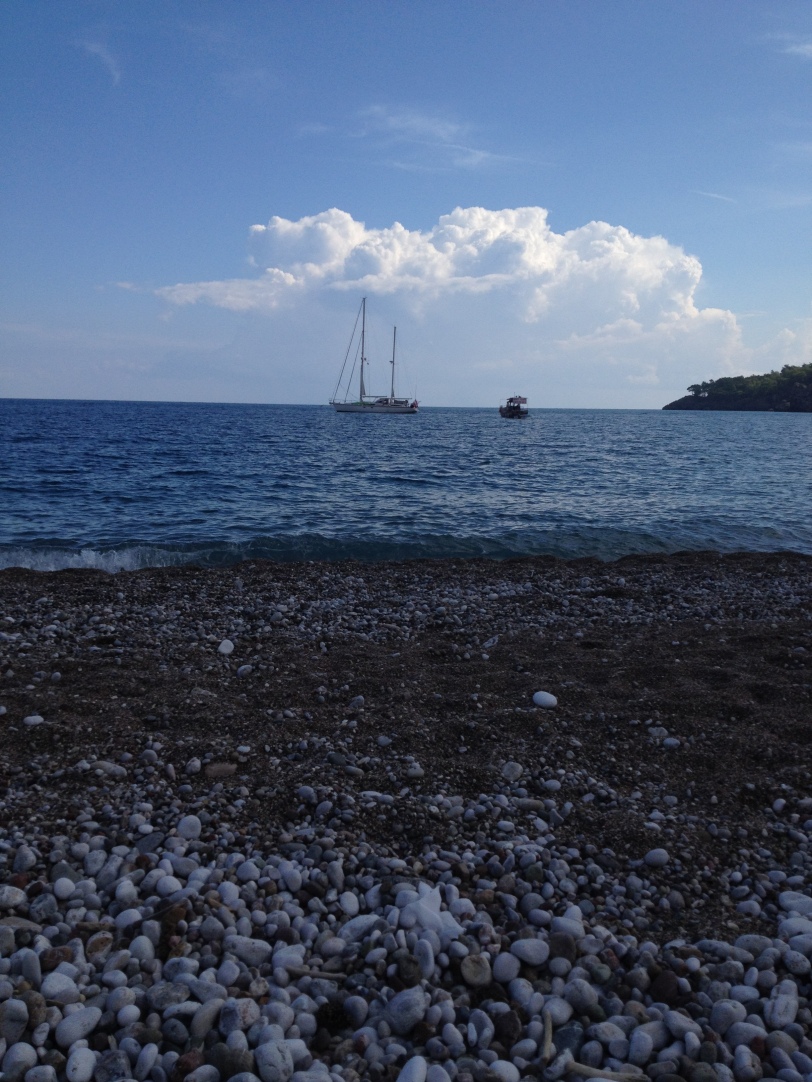 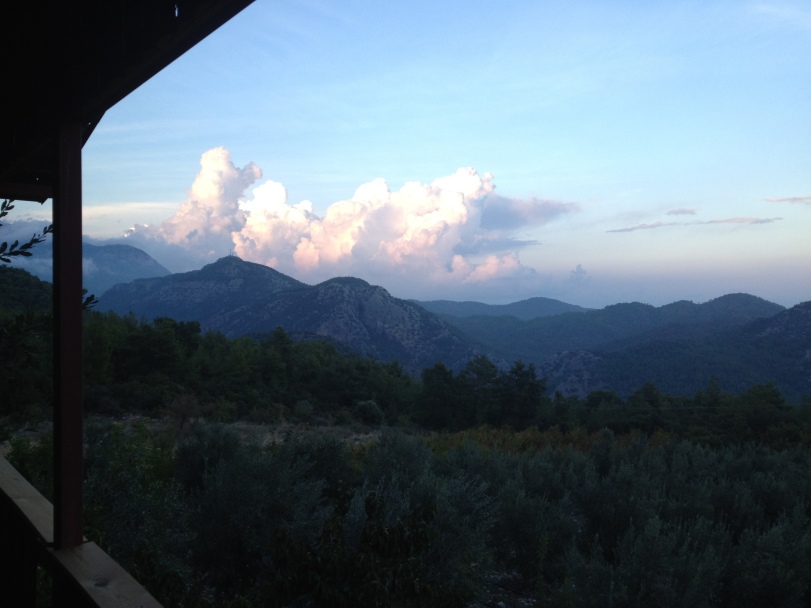 View after emerging from the valley 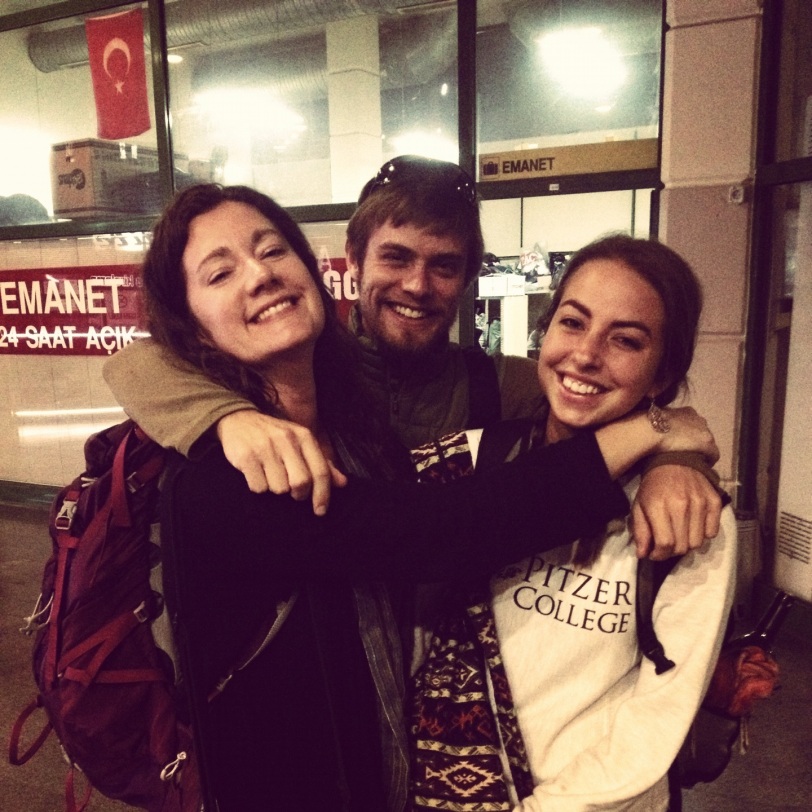